Winner of the #EndHateTogether award – Inclusion Barnet and Barnet Metropolitan Police Service
User-Led Hate Crime Training developed by Inclusion Barnet and the Metropolitan Police Service has won the first ever HEAR #EndHateTogether award. The project has trained over 300 Police officers from Emergency Response, Neighbourhood Policing and CID and contributed to a 700% increase in reports in Disability Hate Crime. Congratulations Mahmuda, Michelle, Michael and everyone involved!

A/PS Michael Richards Disability Hate Crime Liaison Officer who nominated the project said:
“I am most proud of the relationship that we have been able to build between Inclusion Barnet and Barnet Police. Mahmuda, Michelle and their colleagues from Inclusion, as well as from the variety of charitable support centres, have been an inspiration and have worked tirelessly to keep the momentum of the project from its infancy in January 2016. The Borough of Barnet is in a significantly better place when it comes to recognition and understanding of all Hate Crime and specifically Disability Hate Crime” 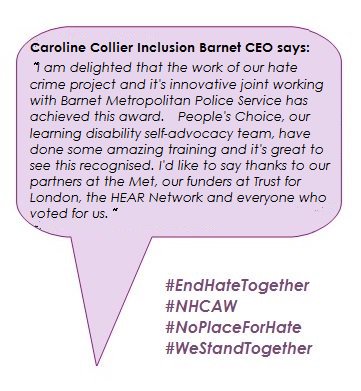 Caroline Collier CEO of Inclusion Barnet says of the win:
“I am delighted that the work of our hate crime project and it’s innovative joint working with Barnet Metropolitan Police Service has achieved this award. ‎ People’s Choice, our learning disability self-advocacy team, have done some amazing training and it’s great to see this recognised. I’d like to say thanks to our partners at the Met, our funders at Trust for London, the HEAR Network and everyone who voted for us”